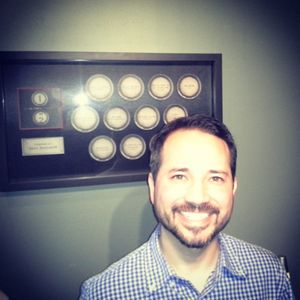 Dave with 12 Stories in his Nashville Studio

Part philosopher and part day-to-day playmaker, Dave has connected with some of the biggest talents in Nashville by ‘keeping his head down’ and ‘following his gut.’

Dave Brainard was just nominated for a Grammy for producing the Brandy Clark album12 Stories, a record he believed in so much that he actually sold some of his own gear to help fund.

But, the story of Dave’s passion for music doesn’t begin there.

Born into a military family, Dave began playing guitar as a teenager while his father was stationed in Germany. He formed a hair metal rock band and within months was playing at major beer festivals and winning awards in European talent contents. At 16, he moved back to Omaha Nebraska, started teaching guitar at a local music store. After high school, he attended the University of Nebraska at Omaha to major in music theory for one year before joining the Air Force Band. He was eventually assigned to play guitar in the country band and it was there that Dave started to discover modern country music.

“Even though my background was rock, I started to find these treasures in country music,” says Dave. “We played all the top 40 songs of the time- from Garth Brooks to Shania Twain and everyone in between. I started to really fall in love with the format.”

It was during this time that Dave reconnected with Tim Bezy, a friend who was making trips to Nashville to write songs. In 1999, Dave decided to take a leap of faith and make the move to Nashville himself.

“I came to town with some pretty clear goals,” said Dave, who waited tables for the first few months to pay the bills. “I wanted to have a publishing deal by July 2001. I signed my first deal in November 2001 with Balmur Corus Music.”

Even though the publishing deal lasted only three months (from losing it’s funding), Dave had a single released by Neil McCoy, and several other cuts by artists like Riccochet and Sammy Kershaw. It was enough success to land some offers from other publishers, which led to his second deal with Big Picture, where Dave where Dave worked two years as a writer and had additional cuts by artists including Kelly Coffee and Brooks and Dunn.

Even though he was a signed writer, as a side business Dave began producing demos for songwriters in his home studio. It was there he met songwriter Jamey Johnson.

“I remember Jamey coming in and sitting down in my home studio to play few songs,” recalls Dave. “I thought, ‘this guy is really good’ but back then I was so new to town that I thought everyone in Nashville was that good. He had some funding so we decided to turn his demos into a full-blown record, and that started the organic process of making his album, They Call Me Country.”

That album not only became Johnson’s ticket into Music Row (he landed a management deal and eventually a record deal), but it also established Dave’s process for producing artists, even though he was still focused on other aspects of music.

“I still saw myself as a songwriter who was making demos,” says Dave. “Through a few experiences that left a bitter taste on the writing side, I decided to open a studio in 2004 to build up demo business.”

Dave had already built a strong client base of hit songwriters like Randy Houser, Rob Hatch, Steven Dale Jones and others. He brought in Brian Kolb to the studio as the onsite engineer, who had a list of stellar clients of his own to help build up the business.

“It was a big risk to open the studio,” says Dave. “I put $100,000 of credit card debt into the launch of the studio, with this ‘build it and they will come mentality’ and thankfully it paid off.”

The studio became the top place for hit songwriters in town to get their guitar vocal demos recorded. And, Dave was continuing to work on producing indie records, which eventually lead to recording an independent project with his longtime friend Jerrod Niemann. 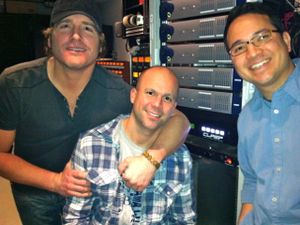 Jerrod Neimann, Brian and Dave in 2010

“I met Jerrod back in 2000, we came to town around the same time,” said Dave. “In 2009, after he lost his record deal with Category 5, he reached out to me about helping him do an indie record. That was the beginning of a year of late nights recording Judge Jerrod and the Hung Jury.”

The album got Jerrod signed to Arista records, and landed Brainard his first #1 produced song, “Lover, Lover.” But, he was slow to realize that the record was the beginning of a new shift towards majoring in production.

“I thought, wow, we have this number one song,” he laughs. “But what did that really mean? I mean, to me I just was such an idealist I thought, I have to just keep working.”

And that’s exactly what he did. He stayed in production mode for the next year making a record on Kaci Bolls and another with his good friend Ray Scott. The record, Rayality, went on to have one of the first XM Highway Finds “Those Jeans” which sold over 200,000 downloads and helped breathe a new life into Ray’s career.

This brings us to Brandy Clark.

Through Jamey Johnson’s team (specifically Emily Marchbanks), Dave connected with Brandy Clark, who had some funding and was looking for a producer.

“Emily brought me some of Brandy’s work tapes to listen to, and from the first line of the first song ‘Pray to Jesus’ I was hooked,” said Dave. “It scared the hell out of me, I thought there was no way I was qualified to produce this record. After I thought about it, I decided that was exactly why I needed to be part of it.”

Dave met with Brandy, and was honest about his respect for her talent and reverence for the songs. Brandy, after interviewing several producers, decided that Dave was the perfect fit.

“From listening to her songs, I had this image of Brandy as a drinker, a smoker, a hard edged person in general,” he said. “But as I got to spend time with her, I was surprised to find out she didn’t really do any of that stuff. I realized that what makes her so special is that she’s just a truly gifted narrator and storyteller.”

Just as pre-production was getting underway, funding for the record was cut down to the bare bones. Management suggested they instead just cut a few tracks, then shop the EP to labels to try to get Brandy a record deal.

“I knew in my heart it wasn’t going to work as an EP, that this record had to be a completed work,” said Dave. “I went home and told my wife that I was going to make a record with Brandy Clark, nothing for me or my time, for cost only.”

The management team kicked in $10k for it, and Dave sold some gear to make enough money for the rest of the costs to cover musicians. Brian agreed to mix the record for free on his own time as well. It was a big risk for both of them and the studio. Clark was an older female and an openly gay artist, and the songs were everything that country music wasn’t at the time.

But Dave was convinced of the project and his gut instinct was spot on. It was in the studio working with Brandy that Dave had a true epiphany around his producing philosophy.

They finished the album and Dave took it home and told his wife that it was his first Grammy worthy record. In the three years that followed, Dave continued to work, producing Jerrod Niemann’s Free the Music and other great artists. But, somewhere in the background, the buzz on Music Row continued to swarm around 12 Stories.

“It was a real head scratcher because everyone, from label heads to publishers, loved the record, which was validating, but no one seemed to know how to sell it,” said Dave. “I heard things like, ‘this is a Mercedes and we’re only set up to ride a ten speed.’ ”

Finally Slate Creek Records signed Brandy and put some money into promoting the album. The reaction from critics and the music industry was overwhelming. With the help of publicist, Jacquelin Marushka, Brandy became a media sensation, making top ten lists from Rolling Stone to the New York Times, playing on David Letterman and Ellen, and even having her song “Stripes” featured on a Superbowl commercial for Beats Music. It wasn’t long after that the Grammy nomination came in.

“From the beginning, everyone who was a part of 12 Stories, especially Brandy, had this sense of stewardship that we had our hands on something that was like a boulder being pulled uphill,” said Dave. “Brandy is so well-deserving and it’s a true honor to be part of it.”

So what is next for Dave Brainard?

“I believe in making a difference, and in excellence,” he says. “I’m always trying to bridge the gap between art and commerce, while maintaining the integrity of the artist. And I want to make records with truly great artists who have character, and work ethic, that will become an asterisk in the timeline of music over the long haul.”

To find out more about Dave and stay connected to his projects, visit Decibel Nashville.